Monolith vs microservices: doing it the right way

Monolithic and microservices based architectures are wide spread across our industry. Former is portrayed as an old approach, while latter as relatively new and more preferred in modern software engineering. This post is an attempt to shift discussion from “monolith vs microservices” topic by addressing the core problem. And using this knowledge outline balanced approach to building software architectures “the right way”.

To better define the problem (or problems) many teams are facing daily let’s review some imaginary project which represents a typical implementation of a monolithic architecture.

In this project each module has vague responsibilities because they are all created and modified as-needed. Therefor communication between modules is chaotic and it all looks similar to the next picture. Bear in mind real projects are much more complex because the have more than a few modules. It is a Spaghetti Monolith architecture. 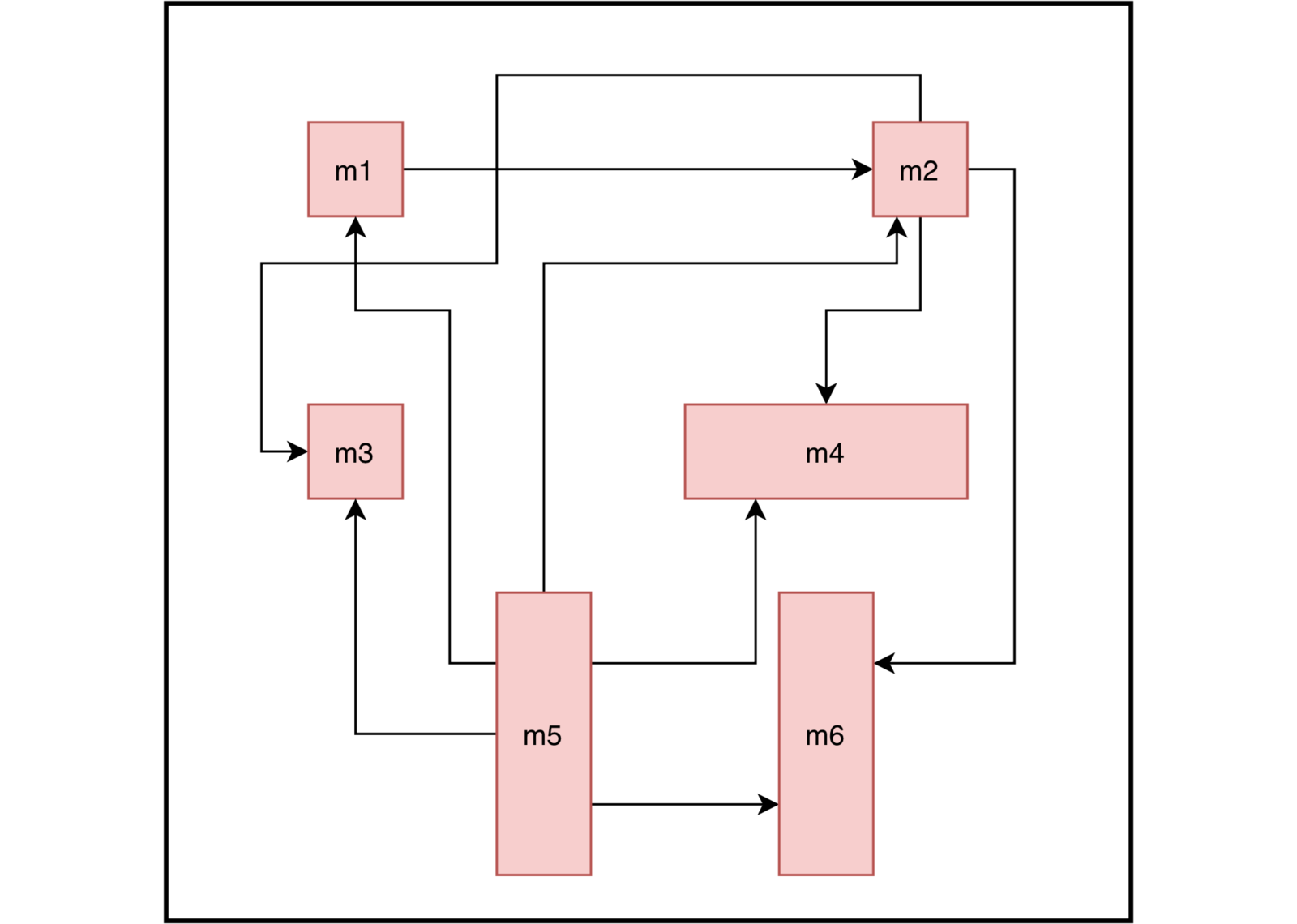 At some point work on this project becomes very challenging. Bug fixes, improvements and any changes take forever. Team members are confused and unable to work efficiently. There are many other problems that it would take another article to list the all and review. So we can stop here and talk about possible solutions to this mess.

Solution that is often recommended in this situation is to break down monolith and migrate to a microservices architecture. This is a lengthy process with it’s own set of challenges and solutions. There is no point in discussing all these details because we need to skip to the end of this process and review the result. For our imaginary project it will look like the following diagram. 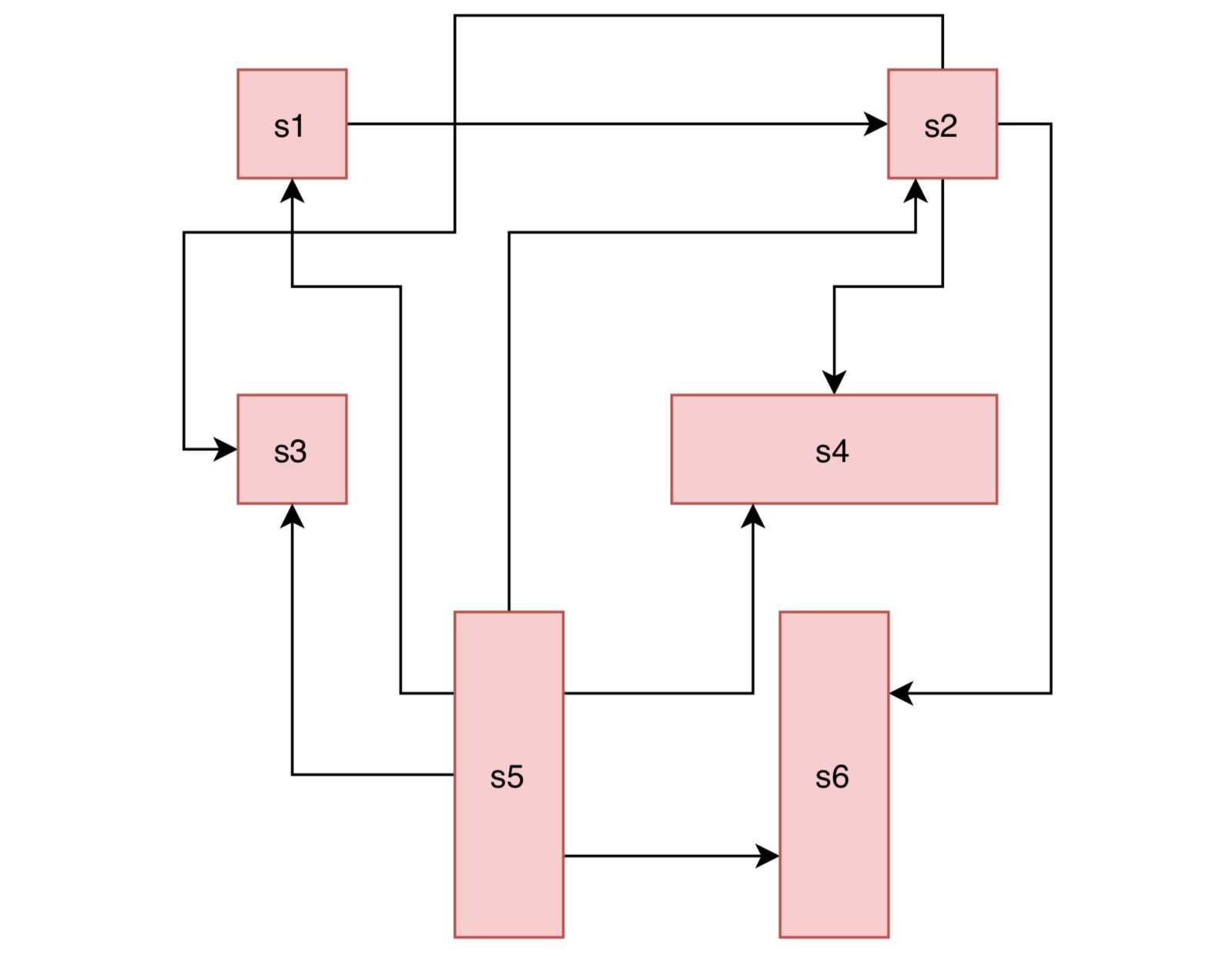 Every module is transformed into an independently deployable service. Database can be split into several independent data stores (not part of this diagram). While this independency can provide some benefits overall situation became worse. In addition to Spaghetti architecture that once was confined in a monolith migration to microservices introduced drawbacks of this architecture (discussed here in more details).

Straight migration to microservices architecture is not a good solution because it does not address the core problem: complexity.

Let’s come up with a bit more pragmatic approach the architecture evolution. Since complexity is the core problem here the logical course of action would be to deal with it first.

Overall, there are two steps:

Ideally they need to be performed sequentially. But this is hard to accomplish in real projects, so they could be done in parallel (almost). For example, part of the project could be reorganized to have better structure (step 1), which makes it a good candidate for becoming an external service (step 2). This can be done while similar reorganization is happening for other parts.

In more detail, step 1 is a transition to a Structured Monolith state. At this point many issues rooted in previously discussed Spaghetti architecture will be resolved, or at least significantly minimized. Project schema will look like the following diagram. 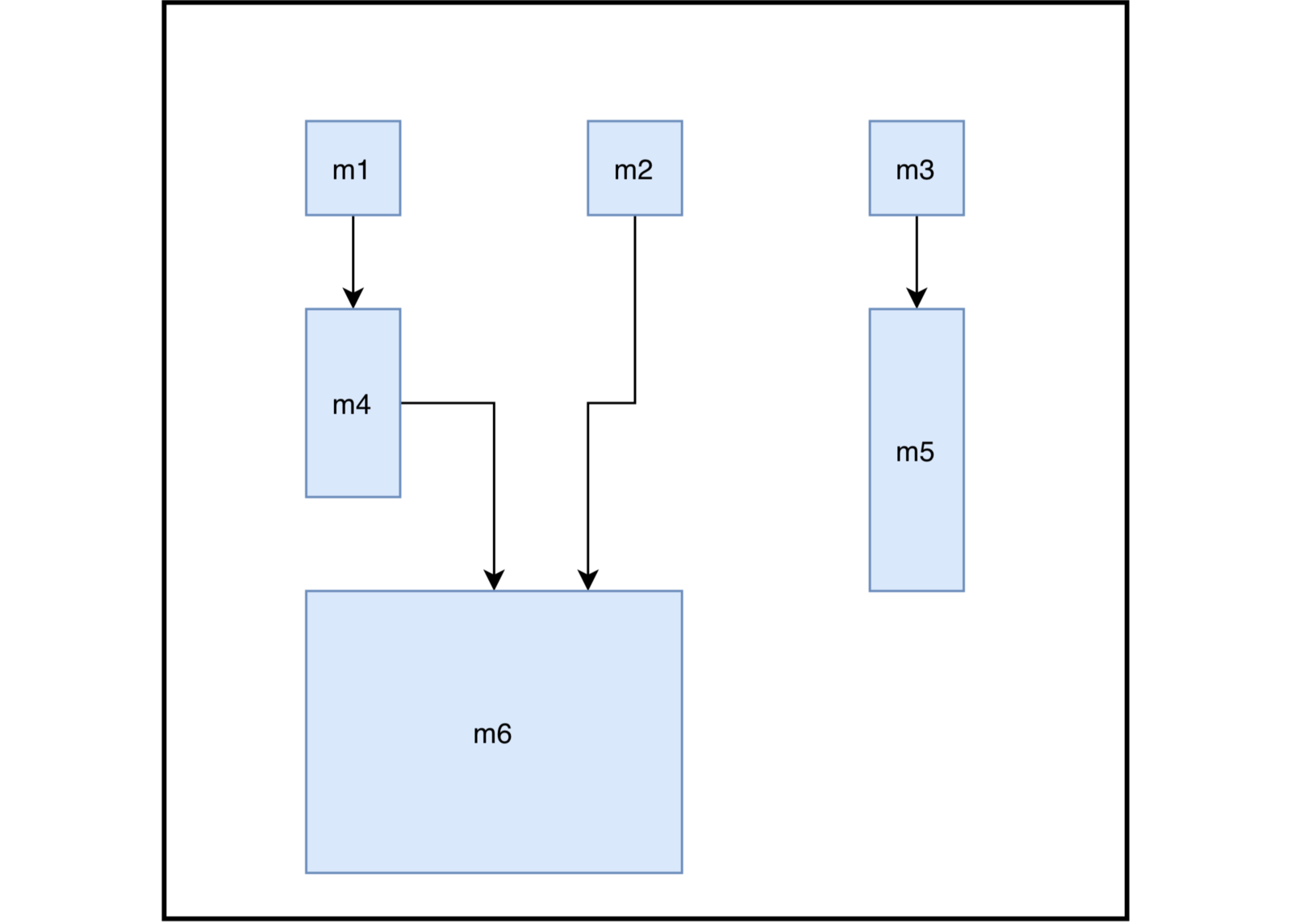 Next step 2, migration to a microservices architecture is completely optional. For some teams or projects it might be enough to create a few external services. Anyway it’s going to relatively easy transition because complexity problem was addressed before. For example, it may look like the this. 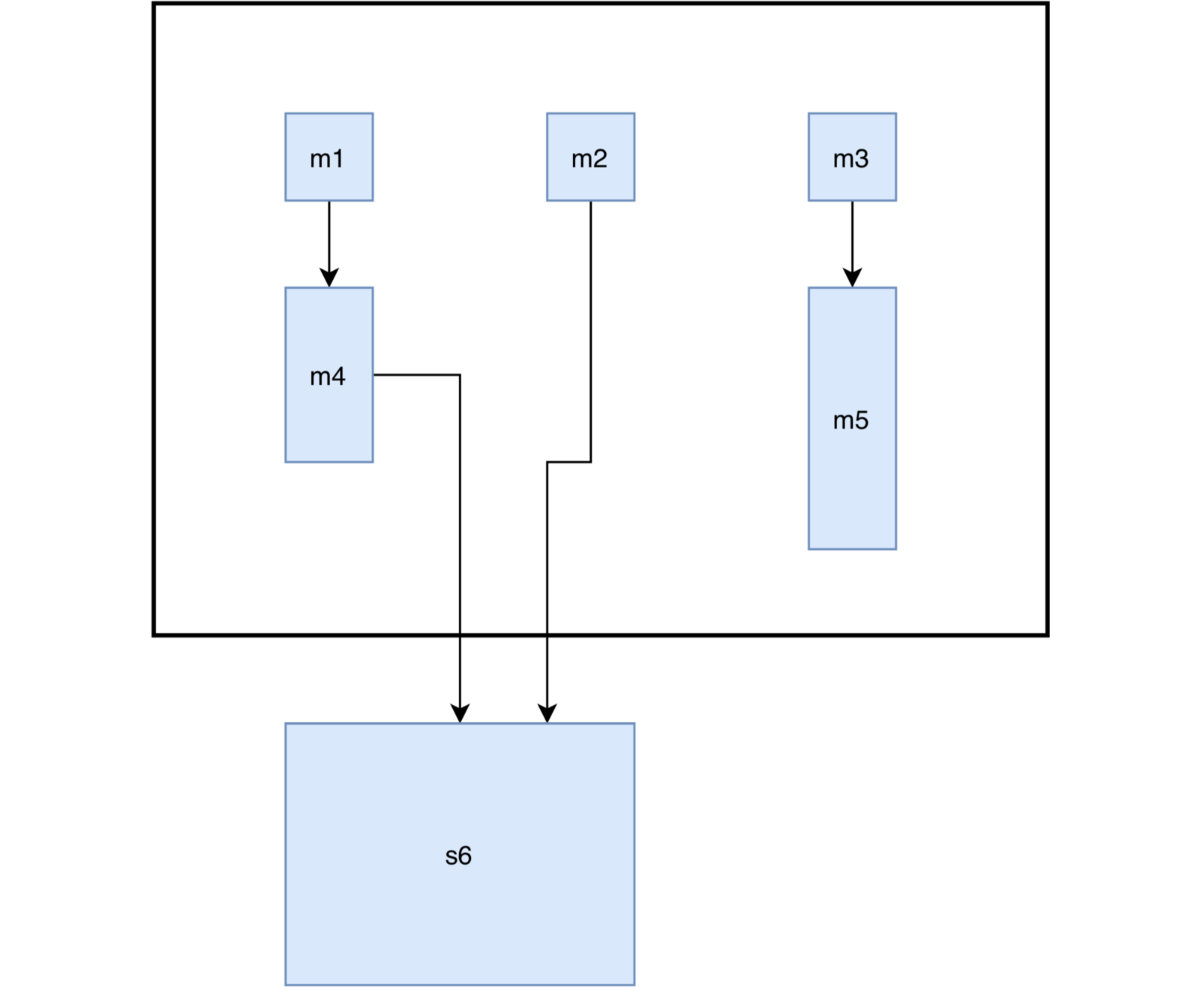 The most critical part of this pragmatic approach is to address complexity problems before scaling the system to be microservices based. In this case teams see earlier results during transition to a Structured Monolith (step 1), and further transition to microservices (if it is necessary) becomes more smooth and gradual.

Even if approach described above looks logical and clear, one question still remain. How to move from Spaghetti mess to a Structured architecture? There is no simple answer as far as I know but we’ll review one wrong way and one right way of moving to a Structured state.

Migration to a layered architecture sometimes performed to deal with a Spaghetti monolith issues. In that case (typically) application gets additional abstractions like “API layer” and “DB layer” in one form or another. This is not solving complexity issue at all. Quite the opposite it becomes worse. Check out the following diagram, complexity is just hidden beneath layers. 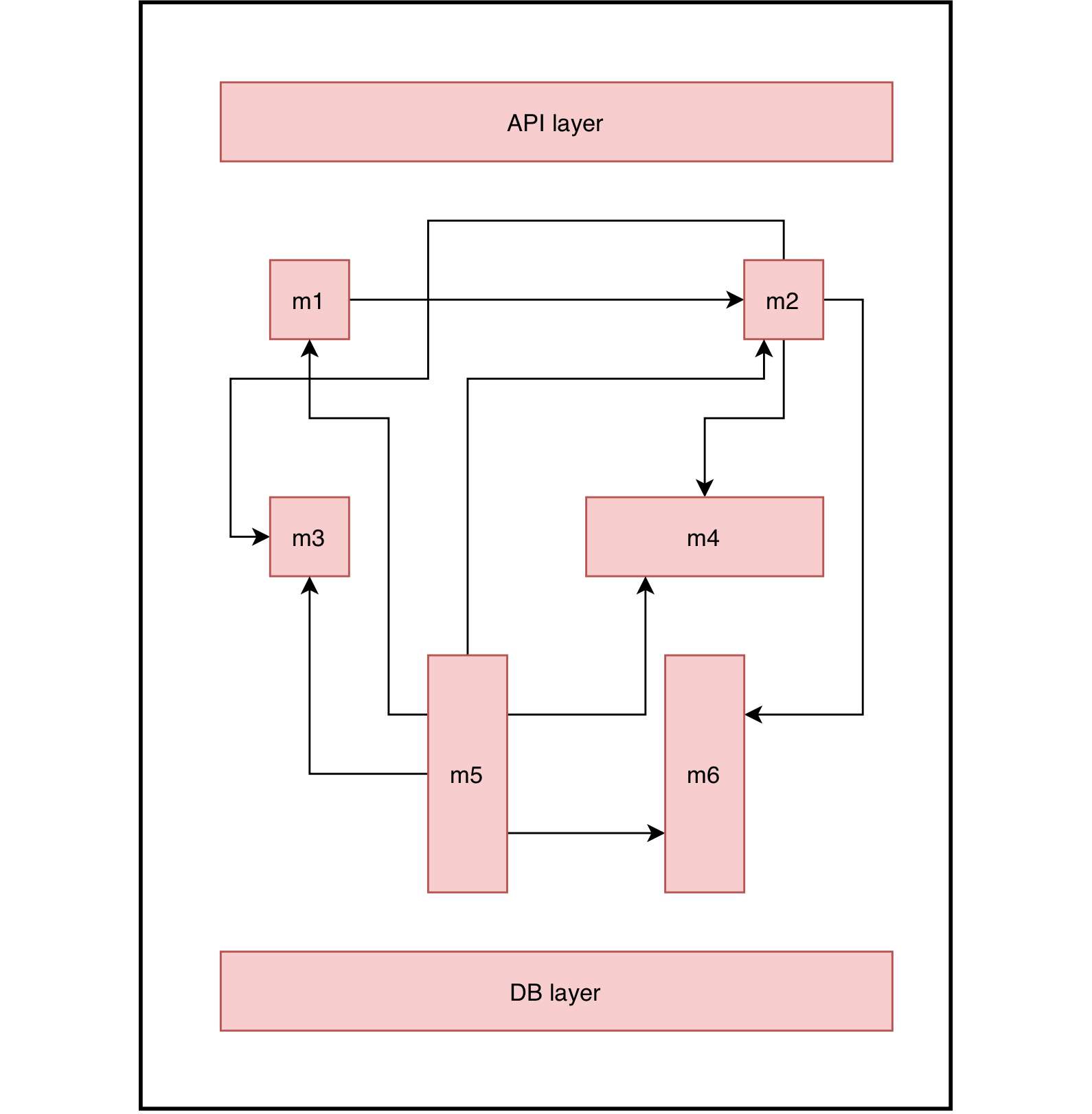 This architecture allows to address the system complexity issues by building modules that have:

More precisely this is not an architecture pattern, but a set of requirements for each module. We can say: 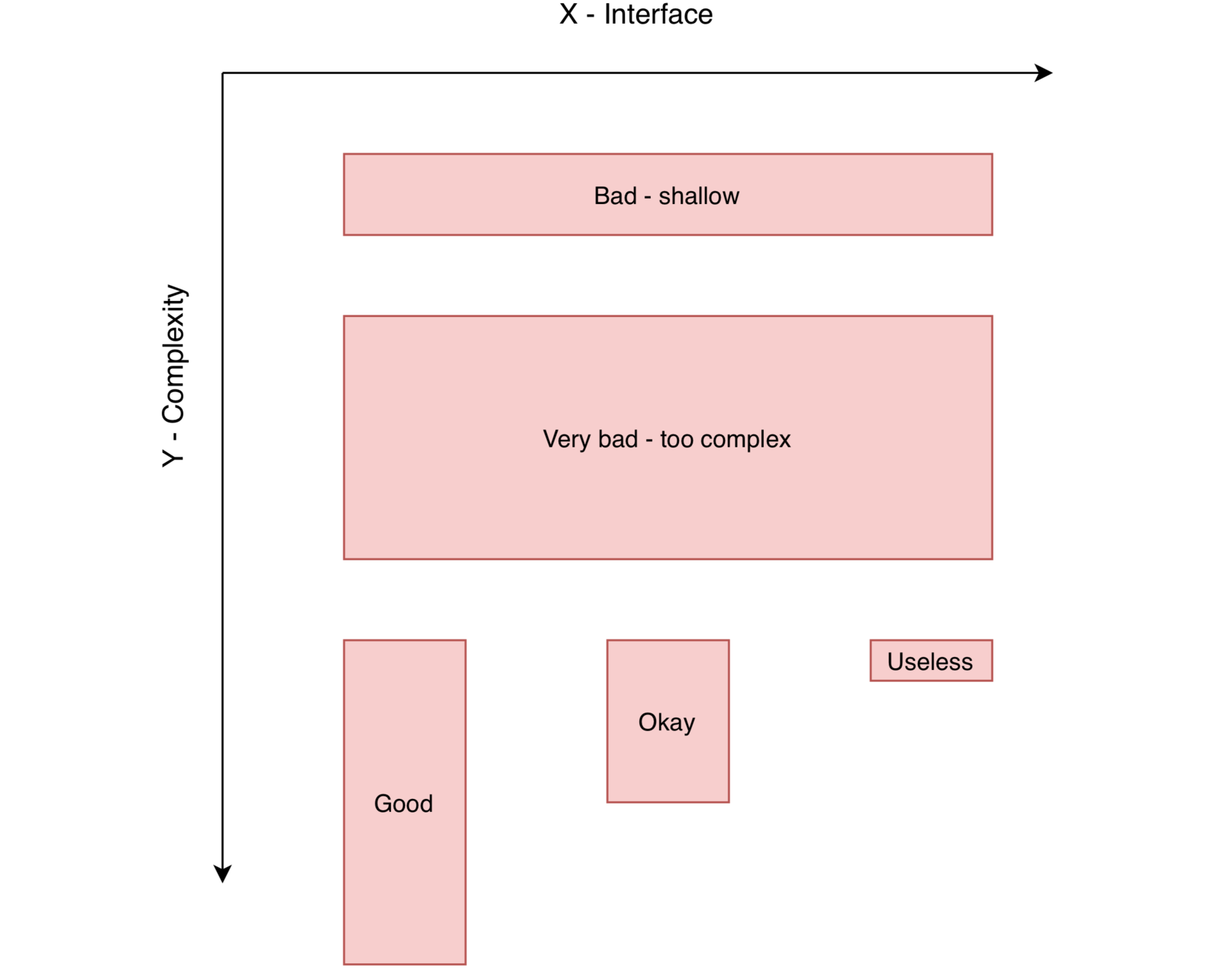 Some comments about each example.

Overall the system must be designed to have majority of “Okay” modules and some “Good” modules. In reality it is not always practical to have all modules with high complexity (or high value).

As a final note, building well structured systems is a key to successful completion of software projects. Using this knowledge you will be able to navigate “Monolith vs Microservices” dilemma in the most efficient way.